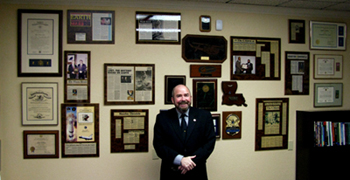 For significant, sustained performance characterized by saving and recovering millions of NASA funds through his investigative efforts.

Special Agent (SA) Gutheinz has impressive educational and professional credentials: He has six degrees, to include his Doctor of Jurisprudence from South Texas College of Law. He has eight teaching credentials, to include teaching credentials in business, aeronautics and police science. SA Gutheinz taught police science for Central Texas College in 1983. He is an Attorney who has been admitted as an Attorney and Counselor of law before the Texas Supreme Court and eight Federal Courts. Joe is also a Certified Fraud Examiner.

In 1987, SA Gutheinz joined the Department of Transportation (DOT), Office of Inspector General (OIG) as a Special Agent. On May 20, 1988, SA Gutheinz was the honor graduate from the Criminal Investigators Basic Course, at the Federal Law Enforcement Training Center at Glynco, Georgia. The following year, he was a distinguished graduate (99 percent) from the OIG Basic Course. For that accomplishment, Joe was recognized in the PCIE Newsletter.

As a DOT OIG Special Agent, SA Gutheinz secured indictments, criminal informations and convictions in seven states. SA Gutheinz successfully investigated over 20 pilots (who were later convicted), to include airline pilots who lied about drug and alcohol convictions
on their Airmen Medical Application Certificates. SA Gutheinz was the case agent in charge of investigating the new Denver Airport. His findings about conflicts of interest, questionable land deals, organized crime connections and possible criminal conduct were used by the FAA to govern its award of contracts.

SA Gutheinz also investigated a state highway department, which resulted in 17 indictments under a Special Prosecutor. SA Gutheinz was awarded a Certificate of Special Achievement for Superior Performance for his work with DOT OIG. He also received two letters of commendation from the U.S. Department of Treasury, and was made an Honorary Lieutenant Governor of the State of Oklahoma.

During his ten-year career with NASA OIG, SA Gutheinz conducted a series of high profile criminal and civil investigations that resulted in multi-million dollar recoveries for NASA and numerous indictments and convictions. SA Gutheinz was the leader of a nine-agency task force that was responsible for the largest indictment and conviction in NASA history: 180 felonies, the conviction of five individuals, and the dissolution of seven companies.

He recovered a $5 million moon rock given to the nation of Honduras by President Richard M. Nixon. He successfully investigated five companies involved in the sale of private rocket missions into space. He led a task force investigation of Boeing North America, Inc., United Space Alliance, and Rockwell International Corporation, which resulted in the filing of a multi-million dollar civil complaint by the U.S. Department of Justice.

During his years of service to NASA OIG, SA Gutheinz was the recipient of numerous commendations and awards. He received a letter of commendation from the Director of the Federal Bureau of Investigation, praising the exceptional job he did in leading the task force. FBI Director Louis Freeh called the investigation the most significant case in NASA history. He received a commendation from the United States Attorney for the Southern District of Texas, which cited his outstanding performance, dedication and professionalism. In July 2000, SA Gutheinz received the NASA Exceptional Service Medal for significant service to accomplishing the NASA mission. He also received a NASA Superior Accomplishment Award Special Act or Service for leading the task force investigation resulting in the filing of a civil complaint. Overall, SA Gutheinz's investigative efforts have received frequent and favorable attention from the Department of Justice and NASA senior management.

SA Gutheinz has had a distinguished government career. He was an outstanding leader as an Army Officer and as a Special Agent with the FAA, DOT-OIG, and NASA-OIG. His initiative and dedication was an inspiration to everyone that worked with him. Moreover, his exemplary efforts contributed significantly to the mission and programs of all the government agencies for which he worked so diligently and with such devotion during his many years of service.